Darlene G. Yamamoto
Soccer field
Comments Off on The Konrad and Adams families meet at a football field in Naperville 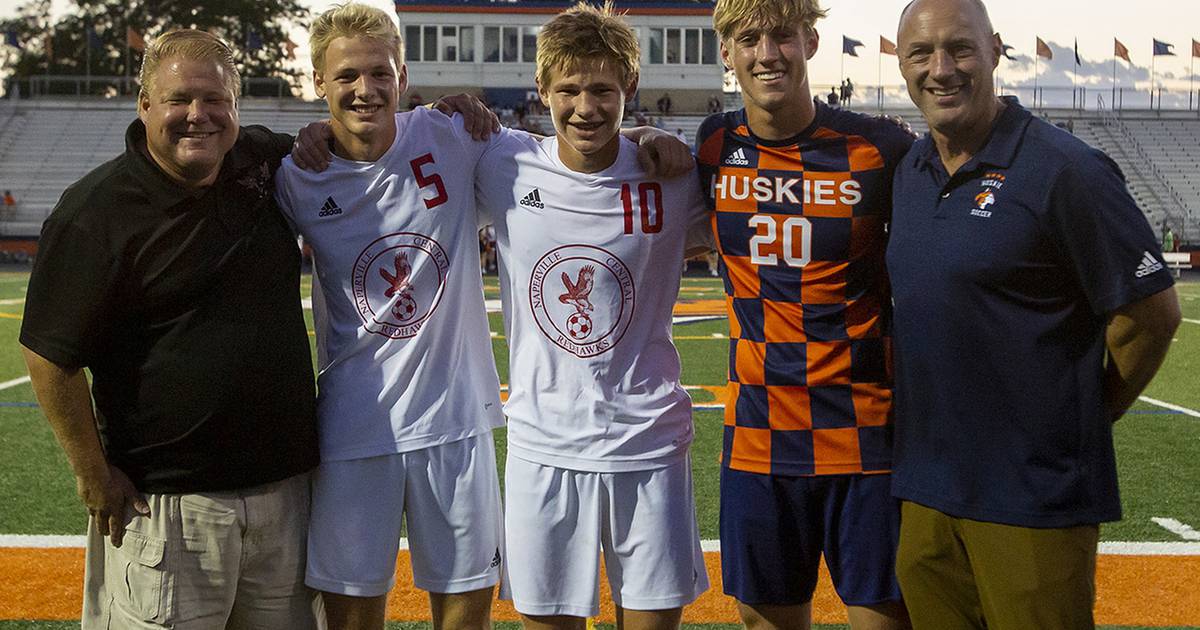 Naperville North coach Jim Konrad and Naperville Central coach Troy Adams have faced each other since 2010 and have been friends for almost as long.

Their teams have faced each other 21 times during this period. All have been memorable, most fiercely competitive, but none have been as poignant for the two men and their families as their clash in Naperville North on Tuesday.

For the first – and possibly the only – time, their three sons played in the game. Senior defenseman Ryan Konrad represented the Huskies, while junior midfielder Carter Adams and freshman forward Chase Adams helped the Redhawks to a 2-1 victory in the DuPage Valley Conference.

“I like that they both played well, they both played under control, they were smart,” Troy Adams said of his sons. “They were both hardworking, they represented their school and they made me proud.”

Despite the fierce rivalry between the schools, Ryan Konrad and the Adams boys are close, having grown up around the game and each other from an early age.

“Obviously it’s super special because we have the connection,” Carter Adams said. “When me and Chase were really little, we used to run around the field for dad after high school games, and we’d see Ryan and Mr. Konrad, and say ‘hello’ to them.”

“We talk a lot with Ryan, whether it’s in club activities or outside of it,” Carter Adams said. “It’s really fun to play and compete against these guys. They really push you to be better.

Chase Adams delivered the signature moment on Tuesday, scoring the game-winning goal on a hard-angled shot with 26:32 remaining in the second half. It gave the Redhawks (10-3, 3-0) a 2-0 lead and came just 28 seconds after senior midfielder Sean O’Reilly scored.

Carter Adams was thrilled for his younger brother, who was playing in his first crosstown game.

“It was a dream come true,” Carter Adams said. “We haven’t beaten North in a long time, and to see my little brother do it and give us a 2-0 lead was super special.

“It was really just a team effort from back to front.”

Naperville Central’s win ended an eight-game losing streak against the Huskies (8-3-1, 2-1) that dated back to the 2017 season. Carter Adams played in three of those losses last year, so Chase Adams was happy to change the narrative.

“I spent those games watching from the stands, still heartbroken,” Chase Adams said. “I really enjoyed watching my brother and wanted to go out there and help him.

“Now that I can, I’m very happy and happy to be able to play with him.”

The Huskies did not go down without a fight. Sophomore midfielder Jaxon Stokes scored with 8:43 left.

“The boys played very well,” said Jim Konrad. “I thought Chase and Carter were amazing, and Ryan played really well too. I’m super proud of them.

“After the game, the kids on the pitch hug and shake hands. They know it was a tough battle, and it was a big win for Central. They deserved to win today.

In a way, though, it was a win for everyone, including the Konrad and Adams families and the fans who attended a great game.

It was also the beginning of the end of an era. Ryan Konrad will graduate in the spring and Carter Adams will follow next year.

“You don’t get a lot of minutes with your own kids,” Troy Adams said. “I realized this summer when I was like, ‘Oh, man, I only have two years left with my oldest before he goes to college. “”

The Konrad and Adams sons could face off once more in a possible sectional match. Both parties seem certain that it will happen.

“Obviously when you beat your rival, it’s super fun,” Carter Adams said. “But I think we will see them again in the sections.”

The Huskies and Redhawks have met in four Division Finals since 2011, with each team winning two. In 2017, Naperville North avenged a regular season loss with a 1-0 win, then won 3-2 last year.

“The last time we lost to them, we won the state championship,” Jim Konrad said. “So hopefully we can tell the same story.”

Matt Le Cren is a freelance writer for the Naperville Sun.