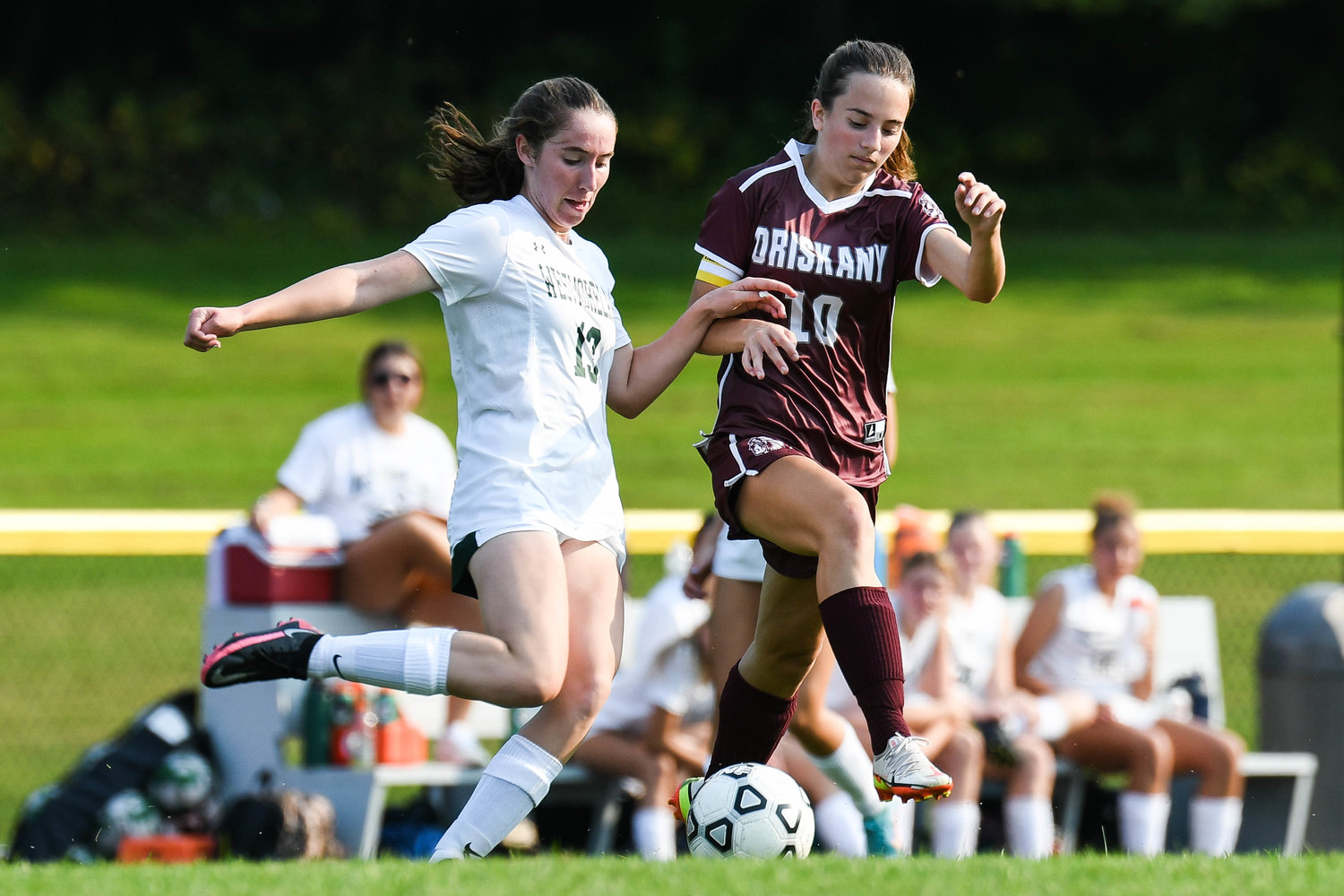 Ella McGregot added a goal for the Bulldogs. Samantha Ferguson collected a pair of assists.

Emily Gubbins made five saves for the shutout.

Westmoreland, now 2-1, hosts Little Falls at 4:30 today in the league.

Oriskany traveled to Frankfort-Schuyler on Monday. Results from the non-league game were not available at press time.

The winning schools of the 17th Vernon-Verona-Sherrill Cross Country Invitational on Saturday were Corning for boys and Saratoga Springs for girls.

Top local finishers were Killian Bauer of Vernon-Verona-Sherrill in 58th, Ben Bellinger of VVS in 69th, Jerome Seidl of Camden in 85th and Josh Musante of Clinton in 99th.

“Personally, VVS had a really good day,” he said. Bauer’s finish was sixth out of 262 sophomores in the race. Nathan Geroux was 11th out of 200 freshman competitors, he said, and “established himself as a major contributor to this year’s team”.

Dunne concluded: “As a team, we were happy where we finished. We work hard to help kids understand that there are many more important races to come, despite their excitement at a major invite on their home course. So, like many teams, we have a long way to go, but we are happy with our initial performance and the direction we will take from now on.

The New Hartford Women’s Soccer Team got a second-half goal from Willa Pratt on an assist from Talia Vitullo in a 1-0 win over Monroe-Woodbury on the road Sunday at the Temple of New York State women’s soccer fame.

Vitullo’s corner kick extended the reigning Class A champions’ unbeaten streak to 41 games. It was a quality win for the team, beating a program that featured in the Class AA state regional final last fall.

Like Sunday, the Spartans’ goal came from Pratt on a pass from Vitullo.

The Spartans are now 3-0-1 this season. They host Oneida at 6 p.m. today in the Tri-Valley League.

Grace Shufelt had assists on two of the Rams’ goals.

In goal for Remsen, Ella Lafave made seven saves and Imagin Aiken made four in split time.

Remsen takes on Center State Conference opponent Town of Webb on the road at 6 p.m. today.

The Clinton Girls’ Soccer Team lost 3-1 at home to Skaneateles in a non-league game on Friday.

Paige Luke scored the Warriors’ lone goal on an assist from Ava Alteri.

Clinton hosts the state opponent from the Utica Academy of Science Center at 4:30 p.m. today.

Siidahmed Somow scored the game’s only goal as Proctor beat Watertown 1-0 at home on Saturday in the non-league game.

The first-half goal came on an assist from Alan Catic.

In the Raiders’ goal, Adim Gacic made 10 saves to register the shutout.

The Westmoreland-Oriskany men’s soccer team beat Frankfort-Schuyler 3-0 at home on Saturday in a non-league match.

The Bulldogs got eight saves from David Cronauer and two more from David Zinicola in split time.

Westmoreland, now 3-0, played a championship game in Little Falls on Monday. Results were not available at the time of going to press.

Gretchen Grimm scored three goals and had an assist and Gracen Grimm added the other two goals in the Clinton Field Hockey Team’s 5-0 win over Morrisville-Eaton on Friday in a non-league game.

Lauren Rey had two assists and Sadie Davignon and Elise Pape had one each for the Warriors.

Clinton visited Center State foe Canastota on Monday. Results were not available at the time of going to press.

The New Hartford field hockey team scored four first-quarter goals en route to an 8-0 home win over Oneida in the TVL on Friday.

Ella Greico scored three times and Sophia Bialoglow added two goals. Sophia Campola scored a goal and an assist. Elise Courto and Bella Kolb also scored once each. Grace McNamara had two assists and Sarah Cleary and Sienna Holmes had one each.

Statistics for Oneida have not been submitted.

New Hartford hosts VVS at 5:30 p.m. Wednesday in the league.

Oneida was at Morrisville-Eaton for a non-league game on Monday. Results were not available at the time of going to press.

Little Falls Field Hockey scored six of five in a 6-2 victory at Whitesboro on Friday in the Warriors’ sixth annual Fall Classic.

For Whitesboro, Casey Clausen scored both goals. Gianna Ross got an assist.

On Saturday, Whitesboro lost 8-1 at home to Fayetteville-Manlius.

Carine Smith and Ella Herber each had hat tricks for the Hornets.

Clausen scored for Whitesboro on a pass from Antonia DiCesare.

Little Falls played a Center State game at New York Mills on Monday. Results were not available at the time of going to press.

Whitesboro hosted VVS in a TVL game on Monday. Results were not available at the time of going to press.

The Red Devils are closing in on victory in field hockey

The Vernon-Verona-Sherrill field hockey team won 2-1 at Cazenovia on Saturday.

Grace Croft and Carmella Garcia each had a goal for VVS. Meredith Guertin got an assist.

Rae Western made six saves for Cazenovia in net.

VVS was in Whitesboro in the TVL on Monday. Results were not available at the time of going to press.

Kiara Khiamdavanh won on vault (9.3) and bars (8.9). Aubrey Hughes won on beam (8.9). Khiamdavanh won the all-around with 35.05 points. Hughes was second and Arianna Kernan of Oriskany was third.