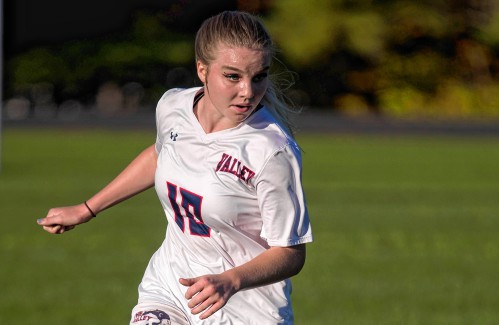 Key players: John stark – Makayla Pellerin (winning goal), Megan Rousseau (goal), Arden Ulmer (assist). Arden Ulmer Assisted Megan Rousseau for the # 1 goal in the 8th minute. Makayla Pellerin had a breakaway in the second half but hit the Pellerin post but more than made up in the last minute of the game in 1v 4 to put Stark in place 2-1. Pellerin stands out as a great offensive player.

Highlights: Pellerin hit the post on a second-half breakaway with the game tied 1-1, but faced four Lebanese defenders and beat them all for the game-winning goal in the final minute of the game.

Highlights: Martinson arrived at the baseline and served a ball into the box that Fitcher was able to put in the back of the net just 40 seconds into the second half.

Coach quote: â€œOur girls have played very hard all season and have shown again today that they can fight with anyone in the division. The last few weeks of the season should be fun. “- Andrew Mattarazzo of Concord

Highlights: ConVal scored on a counterattack in the 16th minute and again in the second half.

Coach quote: â€œWe had a hard time adjusting to ConVal’s disjointed and physical game. We weren’t able to connect the passes we needed to get shots at the net. – Kylee Yam from the MV

Highlights: ConVal scored in the first half on a ball sent into the six-yard penalty area and Pride did not score the equalizer with six minutes remaining. Surprenant took a ball down the line and played it through where he deflected a ConVal defender into the goal, and neither team found the team in two overtime periods.

Coach quote: â€œI was proud to see these guys fight again to the point of exhaustion. They had back-to-back games both of which were in double overtime. When we look at our results, we are in every game, we just need to find the back of the net on some of our chances. Six overtime games in a season is more than what I experienced during my time as a coach. These guys have the skills to play at a high level, we need to have some in the win column as we get closer to the playoffs. – Ken Fuller of the MV

Highlights: Darjee hit the lower right corner of the net from outside the penalty area to open the second half. Tunguru recovered the ball 30 yards from goal and passed through two defenders to hit the ball into the far left corner of the net to make the game 2-0. Wachter collected a few dangerous crosses in the second half to preserve the shutout.

Coach quote: â€œWe were very consistent throughout the game with our build up of attacking midfielders. The effort was there throughout the game and we were able to break them in the second half. We had two quality objectives. – Scott Dunlop of Concord

Coach quote: â€œWe came out flat, but we adapted quickly and played our game.â€ – Chelsea Williams of Kearsarge

Highlights: In a clash between two of Division II’s strongest teams, Stark had more scoring opportunities in a scoreless first half, but Hanover took advantage of a corner to gain the advantage in the beginning of the third. The Marauders were able to fend off a late Generals push, despite John Stark having a 9-4 advantage in the corners.

Coach quote: â€œJust a great field hockey game on a great night. We played hard despite our two starting midfielders and I felt we had a good shot to win the game against an exceptional team. We had our chances, hitting a post and having a few near misses with tips that could have gone either way. I’m very encouraged, despite the loss, that we have the talent to win every time we take the field. “- Dennis Pelletier from John Stark

Highlights: Sophomore Daniels fought off Mascenic’s top runners for the individual victory, leading the Hawks to second as a team at the Cougar Classic, hosted by The Derryfield School. HD, Newport, Newmarket and Raymond competed but didn’t have enough runners to score.

Coach quote: â€œIt’s great to see two individual wins with Bennett in the girls and Daniels in the boys. Even with just five runners, the boys are running strong and staying competitive throughout the season. – Rob Rothe of Hopkinton

Highlights: Bennett led a top-five sweep for the Hawks, giving Hopkinton a perfect 15-point score and an easy win at the Cougar Classic hosted by Derryfield School. HD, Raymond and Derryfield competed but didn’t have enough runners to score.

Coach quote: â€œIt’s always exciting to get a perfect score and they were pretty happy overall. The top five raced together for the first two miles as planned, before a final push for the last mile sidelined them a bit. – Rob Rothe of Hopkinton