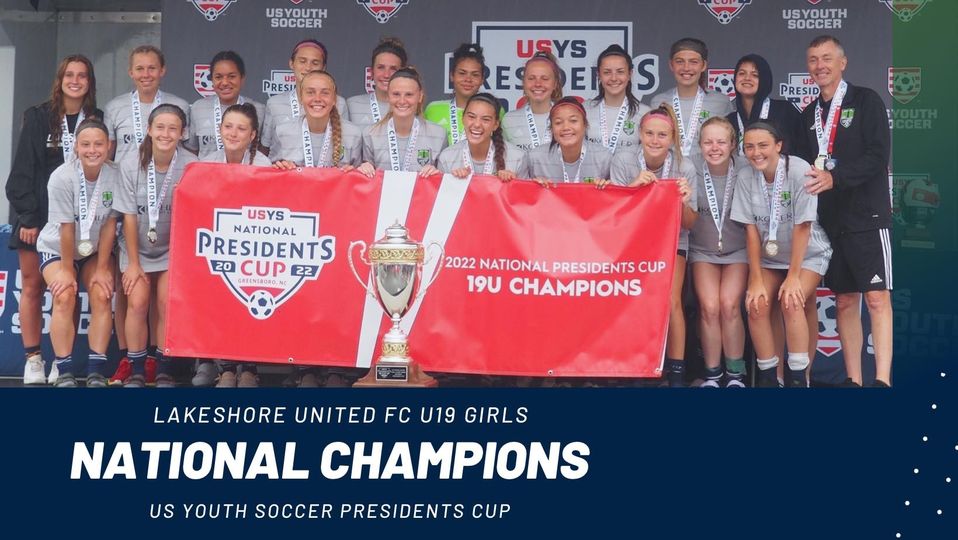 Zwicker scored the tying goal in the dying seconds of the United States Youth Soccer Association Presidents Cup national championship game in Greensboro, North Carolina, this month, and the team clinched the title.

Lakeshore United FC’s U-19 Navy 03 team lost 1-0 in a rematch against California/Albion SC, which handed them their only pool defeat, 2-0, when Zwicker asked an official how much time was left. in the game.

“He said ‘We have about a minute left.’ I started getting upset on the pitch because we were going to lose this,” Zwicker said.

Then Lakeshore United had a chance from a corner kick.

“I said to one of my teammates, ‘This is it. This is our last play,'” Zwicker said.

Erica Herzog of Sheboygan North High School sent the ball down the center of the field.

Zwicker took it from there.

“I was fighting, like, three girls. I just hit him as hard as I could into the back of the net,” she said.

“She was tall,” Zwicker said.

So was this moment.

“It was mind-blowing that I got it. I was crying on the pitch,” she said.

The game went to extra time tied, 1-1, but Lakeshore United had turned the momentum. Their players ran off the field at the end of regulation, while their opponents walked.

“Overtime, I was speechless. My trainer was talking to me. I couldn’t speak,” Zwicker said. “The adrenaline was, like, through the roof.”

Oostburg star Ashley Ternes led her leg to talk. A ball sailed through the air into her strike zone, and she sliced ​​it for a goal, according to a press release from Lakeshore United.

Lakeshore United possessed the ball enough in the final 15 minutes and held on for the championship, making Wisconsin history.

They are the first women’s team from Wisconsin to qualify and win the National Presidents Cup.

“It was surreal. At the final whistle, I watched the players rush onto the pitch in celebration and was thrilled for them. It was if the outcome of their journey ended like in those sports movies wellness that we all love to watch,” coach Jim Veeser said in a statement.

“It was great to see a group of well-deserved young players achieve what they set out to do eight months ago, and it was done by working hard, respecting each other, caring for each other. each other, never giving up and celebrating each other’s successes along the way – a true team.

The team, however, had more inspiration than winning a colossal cup and a gold medal.

One of his players, Kenzie Koppenhaver from Kiel, had a car accident on Christmas Eve 2021, suffered a traumatic brain injury and was in a coma for days. She underwent surgery to release the pressure on her brain, but a few months later she was cleared to start playing football again.

“She was like the class clown on our team. She was funny, she was loud,” Zwicker said.

“I think it made us come together even stronger as a team. We had something we were fighting for. We wanted to win it for her. I think Kenzie was a big part of our motivation.

“I don’t even call it a team. We are all just one family. It’s an amazing girl group. I have never met such an individual group of amazing girls. I love them to pieces,” Zwicker said.

“The way we play together is crazy. You have drama with girls and we don’t have any of that.

In the national qualifying round in St. Louis at the end of June, the team won five games in five days, and Zwicker took on one of the most important roles.

Koppenhaver wanted to play and Zwicker said Veeser hesitantly agreed to put her on for a short time. Koppenhaver was to play in the lead with Zwicker.

“She even asked me before I walked in, ‘Meghan, will you protect me when I’m on the court?'” Zwicker said.

Zwicker has done his job.

“Wherever she went, I went,” she said.

A GoFundMe page to help the family with medical expenses can be found at www.gofundme.com/f/support-the-koppenhaver-family.

Zwicker wasn’t the only local player in the Lakeshore United squad. Belgian Cedar Grove star Cora Erickson, whose 55 goals were second in the state this season, was also a member.

Erickson played in regional tournament games in St. Louis, but missed national championship games because she played with the Wisconsin international team in a tournament in Spain at that time.

“It was so cool. I was so proud of them,” she said of her team Lakeshore United.

She knew Koppenhaver was the inspiration.

“All the girls wanted to win for her, I think,” Erickson said.

Erickson’s other team played seven games in 10 days, including three games in one day, and qualified for the semi-finals of the Donosti Cup, where they lost to a team from Portugal. The competition included teams from Spain, France and California. The tournament featured approximately 700 teams; 48 were in the Wisconsin division.

“We did pretty well,” Erickson said.

She said she loves to admire the mountainous landscapes of Spain. Her favorite place was the beach.

“It was really pretty where we were,” she said.