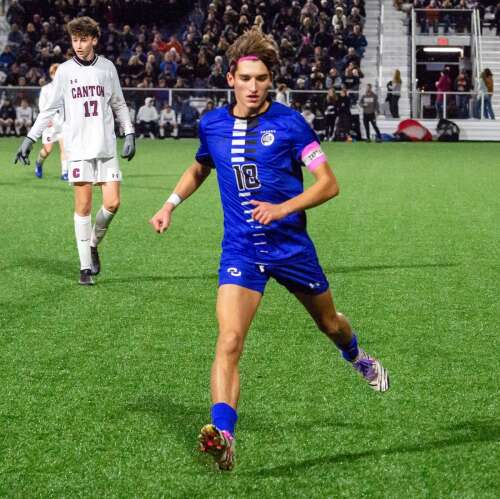 Senior Cam DeAngelo and the Old Saybrook boys football team recently picked up wins over Old Lyme, Westbrook and Valley Regional to improve their record to 6-0 for the fall season. Photo by Wesley Bunnell/Harbor News

The Old Saybrook boys’ soccer team improved to 6-0 this season after picking up wins over a trio of Shoreline Conference opponents last week. The Rams picked up wins over Old Lyme, Westbrook and Valley Regional to maintain their unblemished record for the 2022 campaign.

Old Saybrook kicked off last week’s action with a 3-0 win at home to Old Lyme on September 20. Junior Kevin DeCapua opened the game with a quick score just 35 seconds from the start of the game, giving the Rams a 1-0 advantage at halftime. . Senior Bradley Kulmann scored on a pass from second-half Liam Roberts in the second half to make it 2-0. Senior Cam DeAngelo finished off the win by converting a penalty for a 3-0 lead. Junior London Sweeney made 5 saves to get the shutout in goal.

Then, on September 23, the Rams were on the road to face Westbrook and posted a 3-0 shutout against the Knights. DeCapua scored from DeAngelo in the first stanza to give Old Saybrook a 1-0 lead at intermission. DeAngelo scored from Kulmann in the second half, after which DeCapua netted his second goal of the game to make it 3-0. Sweeney partnered with sophomore Brayden Hagelston and freshman Greyson Richards for the shutout in goal.

In their final game of the week, the Rams hosted Valley Regional and earned an 11-0 win over the Warriors in a Saturday afternoon game at Old Saybrook High School.

The Old Saybrook women’s soccer team took to the field to play three games last week. The Rams earned a tie against Old Lyme before beating Westbrook and then losing to Norwich Free Academy to improve to 1-1-2 this season.

Old Saybrook started the week by taking on Old Lyme to a 1-1 draw in a road game on September 19. Sophomore Breleigh Cooke scored the Rams goal from a pass from senior Allie Lamotte, putting the ball over Old Lyme’s head. goalkeeper just outside the penalty area.

Then, on September 22, Old Saybrook hosted Westbrook and edged the Knights 2-1. Senior Elizabeth Ryan and Cooke scored the goals for Old Saybrook in the game. Both scores are due to assists from Lamotte.

The Rams ended their week by taking a 1-0 loss at Norwich Free Academy in non-conference action on September 24.

The Rams will play a home game against Morgan on Friday, Sept. 30 at 4 p.m. After that, Old Saybrook will have an away game against St. Bernard on Monday, October 3 at 3:45 p.m. and then face Montville on the road. Tuesday, Oct. 4 at 6 p.m.

The Old Saybrook field hockey team had three opponents on their schedule for action last week. The Rams came out of the streak with a win, a loss and a draw, raising the team’s record to 4-2-1 this season.

On September 19, Old Saybrook traveled to Deep River to play Valley Regional and suffered a 2-0 loss to the Warriors. Then on September 23, the Rams hosted Haddam-Killingworth and shut out the Cougars 1-0 at Old Saybrook High School.

Amelia Sigersmith scored the game’s only goal as Old Saybrook beat HK. Kendall Dobratz got the assist on the goal.

Brianna Berdiales started in net and made 7 saves for the Rams. Kate Molesky took over in goal in the second half and made 4 saves to secure the win.

By the next day, Old Saybrook was on the road to face East Lyme and played the Vikings tied 0-0 in the non-conference contest. Berdiales played on goal in the first half and made 5 saves. Molesky came in to play the second half and made 1 save. Berdiales returned to goal for extra time and made 2 more saves as the game ended in a scoreless stalemate.

Old Saybrook will play a road game against Morgan at the Indian River Complex on Thursday, September 29 at 6:30 p.m. After that, the Rams will host the Westbrook-Old Lyme co-op team on Monday, October 3 at 6:30 p.m.

The Old Saybrook men’s cross country team finished fourth when the Rams entered the Going to the Sun Invitational on Sept. 21. The meeting took place at Coginchaug Secondary School in Durham.

The Old Saybrook Women’s Cross Country Team posted a fourth place performance in the Going to the Sun Invitational at Coginchaug High School. The invitation took place on September 21 in Durham.

The Old Saybrook-Westbrook (OS-W) football team hosted Capital-Achievement for a Pequot Conference Sassacus Division match on September 24. -3 overall with an 0-3 record in the division.

OS-W’s next game is a divisional duel against Coginchaug/Hale-Ray/East Hampton (0-3, 0-2) on Saturday, October 1. The contest will begin at 1:00 p.m. at Coginchaug High School.