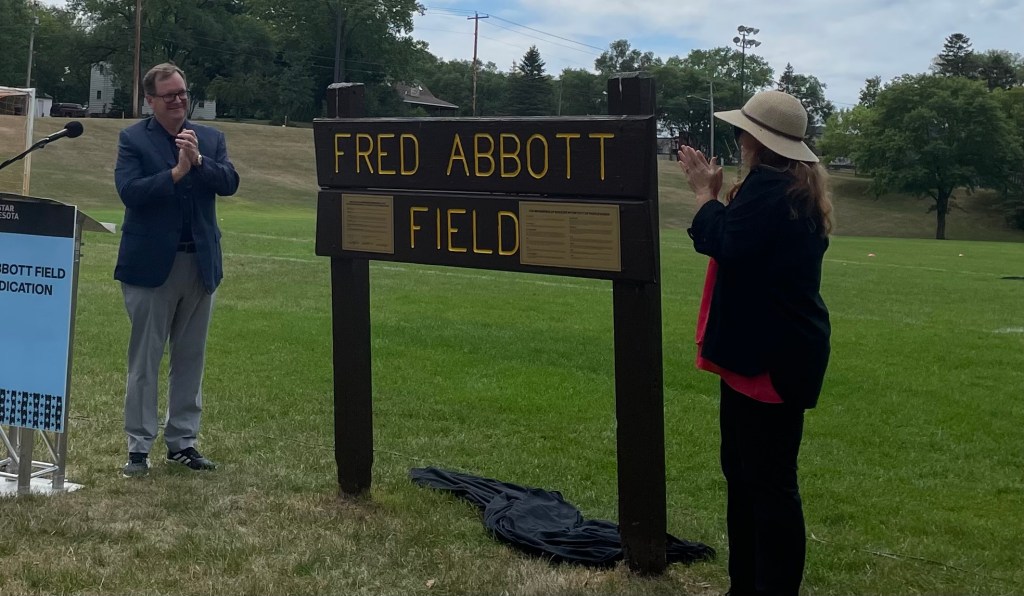 The main goal was to rededicate a football pitch at Hazelwood Park in the name of Fred Abbott, who developed the game in Maplewood, Oakdale and North St. Paul through the Northeast Soccer Association. It started with 17 attendees in 1974, grew to 1,700 a decade later, and had around 2,200 players by 1999, when it was named Fred Abbott Field.

Now with the Major League Soccer All-Star Game at Allianz Field on Wednesday, the rally was also an opportunity to commemorate the work of Fred’s son, Mark Abbott, who served as the league’s first employee in 1993 and who will retire this year as President and Deputy Commissioner.

Mark Abbott was born in England, and together with his younger sister Heather grew up playing on these courses in Maplewood. Heather now lives in Los Angeles, but she returned to her childhood home with her own children last summer and saw that the lot’s signage needed sprucing up,

“(My dad) would have beamed with pride and amazement, like me, at the growth of football across the country, and he would have been amazed, especially at what happened here in Minnesota,” Mark said. Abbott, who works at the league’s offices in New York and lives in Connecticut, said during the presentation. “With the success of Minnesota United, the magnificent Allianz Field, he would have been so proud that, almost 50 years after my friends and I … played on this ground, this community would host the MLS All-Star Game, and the whole world let’s see what football in Minnesota has become.

Heather Abbott wanted her brother to receive some notoriety.

“When we were kids it was, ‘What is football?’ Heather told Pioneer Press. “Now that my brother is part of the reason people know what football is in the United States, for us, it’s amazing.”

The on-field signing in Maplewood was the first official event of MLS All-Star Week in Minnesota. Other highlights include:

– MNUFC announced on Sunday the addition of midfielder Jonathan Gonzalez on loan from Monterrey to Mexico’s Liga MX until the end of the 2022 season. The Loons gave Colorado Rapids $50,000 in general allocation money for Gonzalez’s discovery rights to MLS. Gonzalez, who arrived in Blaine over the weekend, could make his Nashville SC debut on Sunday.

– Tommy Williamson’s hat trick helped MNUFC2 to a 3-3 draw with Colorado Rapids 2 before Minnesota lost 5-4 in a shootout late Saturday night. Williamson, who was drafted 12th overall by the San Jose Earthquakes in 2021, had nine goals, a team high this season. The 23-year-old scored six goals for the Pittsburgh Riverhounds in the USL Championship last season.

– Minnesota forward Morgan Turner became the first player to go from the amateur team to the pro level. Aurora said Turner, a Maple Grove native who played at Wayzata High School, will join SCU Torreense in Portugal. She scored eight goals in 11 games in the USL W League last season.