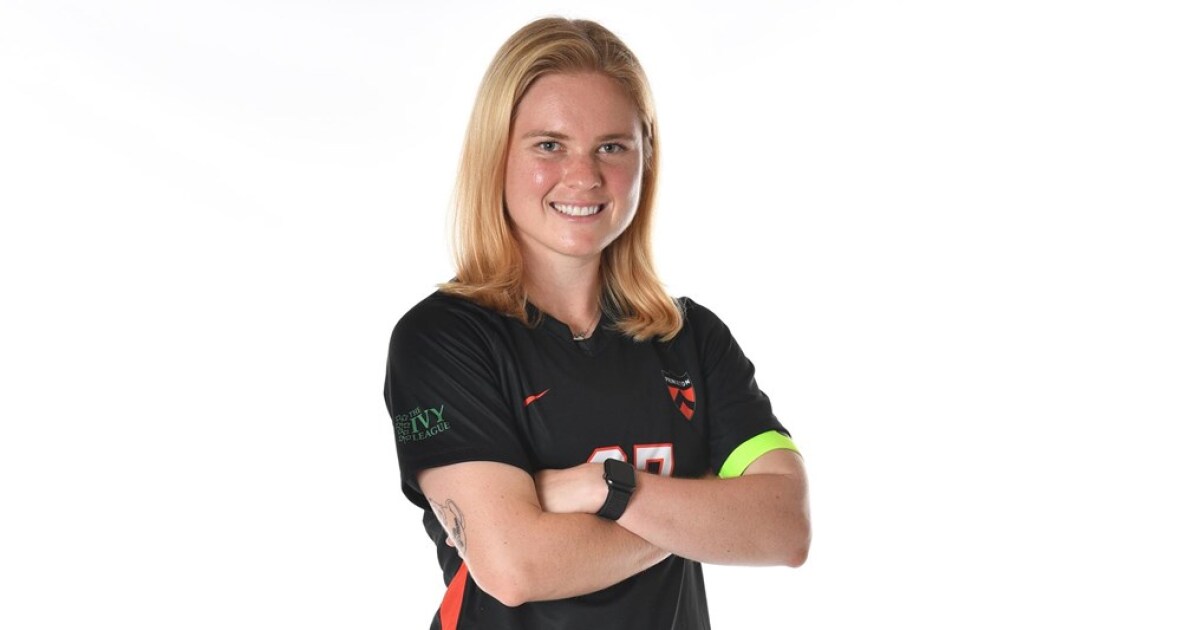 Rancho Santa Fe native Lucy Rickerson recently earned United Soccer Coaches Scholar All-America Third Team honors. A senior at Princeton University, Rickerson was one of 40 players selected in all of Division I and was the only recognized Ivy Leaguer. She was also named All-Ivy League first team for the second time, capping four years of All-Ivy honors.

Playing on two Ivy League championship teams and three NCAA tournament teams, Rickerson played defenseman in 65 total games, making 61 starts and helping the team maintain a goals-against average. throughout the season below one goal per game in the four years of his career.

She served as captain during the 2021 season, where the Tigers finished the year ranked 17th nationally. In Rickerson’s 18 games, Princeton allowed just 15 goals and 10 shutouts.

Majoring in politics, Rickerson grew up in Rancho Santa Fe and attended the R. Roger Rowe School. She played in little league Rancho Santa Fe and was the only girl in the majors division until she got older. In eighth grade, she transferred to Bishop’s School, where she graduated from high school.

During her youth football career, she was co-captain of her Surf Soccer Club team, which enjoyed an impressive five-year career at national level. More than 20 players from this team have earned scholarships to Division 1 colleges to play football across the country, including UC San Diego, Stanford, Texas, Montana, State Washington, Georgetown, NC, USC and Santa Clara.

A Q&A with Lucy Rickerson:

How does it feel to receive this United Soccer coaching recognition plus four years of All-Ivy honours?
It’s been incredibly flattering to be recognized not just this year, but throughout my college career. I think, especially this year, it was particularly satisfying because it kind of represented the high point of my time on the Princeton Soccer program, and it was amazing to finish on such a high note with my team. . It’s not easy to go 15-3-1 with the kind of teams that were on our schedule this year, so the fact that we’ve been able to do so well and have so many people on our team is recognized either with Ivy or United Soccer Coaching honors really show how prepared and motivated everyone was to return after our season was canceled in 2020.

After taking a year off last year, I was really concerned that the time off would affect my individual performance, as well as hurt how well we could fit together as a team, so doing so well was really a testament to the personalities in our squad, and how each player channeled all their energy into every minute they stepped onto the pitch.

What was most memorable about your years playing for the Tigers? (and did you have to adapt to the cold?!)
It’s hard to talk about favorite moments without mentioning our double overtime victory and golden goal against UNC in the Sweet Sixteen of my freshman year. It was one of the most special moments I’ve had on a football field, and the fact that we got to do it on the UNC field made it even more satisfying. Of course, every season there have been a handful of games and goals that I will never forget. Coming from behind this year to beat Rutgers 4-3 on their home turf comes to mind (as well as Grace Barbara’s PK saving this game to keep us in the running), being able to travel to UCLA my freshman year and play in a stadium I grew up watching games, Olivia Kane’s game-winning goal in overtime against Dartmouth my junior year, Natalie Grossi becoming the Ivy League’s all-time leading shutout holder (male or female) in that same game, Tatum Gee taking advantage of the simple mistake the Harvard defense made against us to give us a 1-0 lead last season, and of course my freshman year, playing our first NCAA game against Monmouth at a temperature of 20 degrees.

Of course, I grew up playing in San Diego, so I was used to perfect weather all year round. The worst condition I played in was rain, and even then it wasn’t that cold. I haven’t had to adapt to the cold as much in my everyday life, because realistically, when it’s cold here, you just put on more layers, and that sucks, but it’s not terrible, but playing football is another animal, since you can really only wear Under Armor and gloves while trying to functionally move all parts of your body and fight other people who are also freezing. I think I dissociated for most of that Monmouth game because my body shut down, but I remember precisely how hard it was to kick a ball when you couldn’t feel your legs and any impact stung. My clearest memory of the whole game was sitting in our team room at halftime, clutching an electric blanket and in disbelief that playing in the cold was 10 times worse than playing in the heat. dryer in which I would often have to play at home. when we had games in Temecula, or Los Angeles, or God forbid, Lancaster.

What do you remember about your time in Surfing and what impact did it have on your college career?
The most important thing I remember from my time at Surf is how many incredible players I had the honor of growing up with. I really don’t think I would have made it to college football if it weren’t for the incredible athletes I got to practice with every day starting in sophomore year. I might not have realized how talented they all were back then, but their desire for greatness, even when we were young, was a big part of my drive to keep playing and improving. .

The transition to college football was certainly not easy, as I was playing against older, faster and more experienced players, but I always say that the club’s transition to college football was probably easier compared to a lot of players. Other people since I was had already defended the best players in the country by the time I was 18. Even now, I attribute a lot of my success as a defender to offensive players like Catarina Macario, Julie Doyle, Taylor Kornieck, Arlie Jones, Chloe Frisch, and so many other people on my team that I should score at training every day. They pushed me so hard, but, looking back, I was defending some of the best forwards in the country.

Although everyone on my team was working to get to college level, it was such a tight-knit group of people, and some of my favorite football memories were spent with them in random hotels in random towns, in hanging out, taking ice baths, watching MTV, and talking about all our plans for the future. The fact that I’ve been able to see so many of them dominate in their college programs, and now there’s a handful that I can continue to watch as they begin their professional careers is such an amazing thing, and I’m so proud that they are doing what they love.

What’s next for you?
I’ve known for a while that I don’t want to continue playing football at a high level after college. Sport has been a big part of my life, and I’ve met my best friends there, but it’s always been something I love, not something that feels like a job, and I’m afraid that if I tried to take my career further, it would feel like an obligation. After having such an incredible season last year with my team, I knew this was definitely the note I wanted to end on, with a group of 28 women who had incredible chemistry and lifted and encouraged each other. always each other.

As I look to find a job, I know deep down that I will most likely join a YMCA league, or something of that caliber just to keep doing what makes me happiest, but I’m so excited to get started the next adventure of my life, and I know I have this sport, the people I’ve met through this sport, and the doors this sport has opened for me, to thank for all that’s to come.