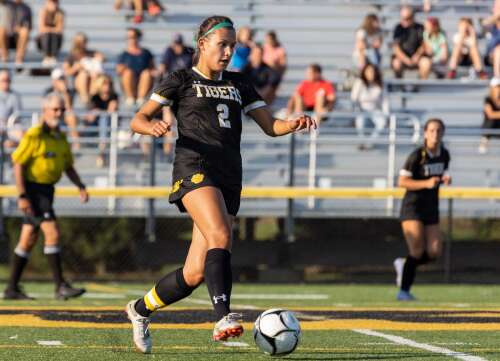 Senior Maddie Coulis and the Hand girls football team suffered a loss to Cheshire in the CSC semi-finals last week and are now preparing to play in the Class L state tournament this week. Photo by Wesley Bunnell/The Source Photo courtesy of Wesley Bunnell

Senior Shawk Staak and the Hand field hockey team gave Cheshire a great game when they lost 1-0 to the Rams in the semi-finals of the SCC tournament on November 1. Photo by Wesley Bunnell/The Source Photo courtesy of Wesley Bunnell

Hand’s girls’ soccer team traveled to Middletown to face Mercy in the semi-finals of the SCC tournament last week. The Tigers suffered a loss to Mercy in the conference semifinals to put their overall record at 14-3-1 entering the Class L state tournament this week.

After picking up a 2-0 win over Guilford in the quarter-finals, the No. 3 Hand seed hit the road to take on No. 2 Mercy for an SCC Tournament semi-final match on Nov. 1. Hand dropped a 2-0 decision to Mercy, who then suffered a 2-1 loss to Cheshire in the Championship game.

Hand is the No. 6 seed in the Class L state tournament and will host No. 27 Rockville for a first-round contest on Tuesday, Nov. 8 at 5 p.m. If the Tigers win, they will host the winner of No. 11 Woodstock and No. 22 for a second-round game on Thursday, November 10 at 2 p.m.

The Hand Boys football team will participate in the Class L State Tournament starting this week.

With their overall record of 7-7-2, the 21st-seeded Tigers will open the state draw by playing a road game against 12th-seeded Bassick in the first round on Monday, November 7. at 17 o’clock. With a victory, the Tigers would face the winner of the No. 5 seed Berlin and the No. 28 Stratford in the second round on Wednesday, November 9 at 2 p.m.

The Hand field hockey team were on the road to take on Cheshire for a semi-final of the SCC tournament last week. The Tigers lost a 1-0 decision to Cheshire in the CSC semi-finals and are now 12-5-1 overall as they open play in the States this week.

Hot on the heels of a 5-0 win over Sacred Heart Academy in the quarter-finals, the 3rd-seeded Tigers played a game on the road against No. 2 seed Cheshire in the semi-finals of the tournament CSC on November 1. Cheshire won the contest by a score of 1-0 to advance to the championship game, where the Rams took a 2-1 win over Branford to claim their first conference title since 2013.

Hand is seeded No. 5 in the Class L State Tournament and hosts Avon for a first-round match on Tuesday, Nov. 8 at 7 p.m. If the Tigers win this game, they will face the winner of the No. 4 seed Simsbury and No. 13 Pomperaug in the quarterfinals on Thursday, November 10.

The Class M semi-finals will be played on Tuesday November 15 and Wednesday November 16. The state final will take place at Wethersfield High School on Saturday, November 19.

The Hand women’s swim and dive team took to the water to compete in the SCC Championship held at Southern Connecticut State University on November 3. The Tigers finished in fourth place with a team score of 697 in the SCC encounter. Cheshire won the title by scoring a total of 1,226 points.

A few days before the swimming portion of the SCC competition, the Tigers sent three athletes to compete in the SCC Diving Championship at Sheehan High School on October 29. Speerli finished in 15th place with a score of 310.10 points for the Tigers. Junior Hadley Reiss finished 19th (283.30), while second Georgia Cohen placed 23rd (267.15) during the meet.

Vlieks finished in 29th place on behalf of the Tigers in the State Open Championship. Vlieks clocked 20:36 to claim 29th place in the competition.

Grenier finished in 37th place for Hand at the State Open Championship. Grenier crossed the finish line with a time of 17:01 to take 37th place in the competition.

Montana posted a 79th place performance at the Open. Montana ran a time of 17:41 to finish in 79th place for the Tigers.

Hand’s football team hit the road to take on North Haven for a CSC Tier 1 game on Nov. 4. The Tigers suffered a 35-14 loss to the Nighthawks at North Haven Middle School to improve to 2-6 overall with a 1-5 record in the division this year. North Haven improved their overall record to 7-1 and are now 4-1 at SCC level with the win.

Junior Aidan Dolan recorded the first score of the game when he rushed for a 75-yard touchdown just 59 seconds into Hand’s game against North Haven. Sophomore Jack Healy made the extra run for a 7-0 Tigers lead.

Calandrelli went 12 for 23 passes with 98 yards to go on his rushing touchdown for the Tigers against North Haven. Dolan ran the ball 12 times for 124 yards and a touchdown on the night. Junior Gavin Wagner had 9 carries for 43 yards, while second Tyler Narracci rushed 12 times for 32 yards.

Senior Sam Sisk had 6 receptions for 66 yards in the contest. Junior Owen Preskar had 3 catches for 16 yards for Hand.

Hand hosts Sheehan (3-5) for his next game at the Surf Club on Friday, Nov. 11 at 7 p.m. The Tigers will then be on the road to face Guilford in their annual Thanksgiving week game on Wednesday November 23 at 7 p.m.