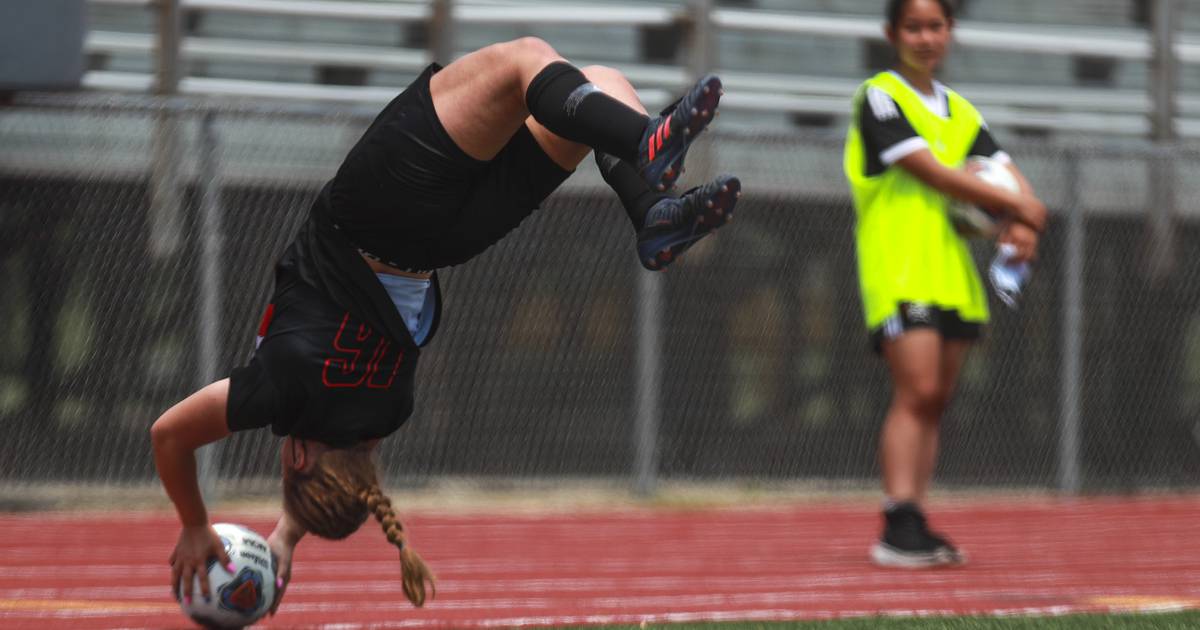 To say Grace Grundhofer was all over the field for the Lincoln-Way Central women’s soccer team is an understatement. The elder was a mainstay in the Knights backline, helping anchor a defense that allowed just eight goals this season and finished third in the 3A class after going 25-2.

What sets Grundhofer apart as she was named Player of the Year by The Herald-News is also her ability to master the attack, from almost anywhere on the pitch. When the ball went out of bounds and the Knights received a throw-in anywhere near the other team’s goal, Grundhofer made her way from where she was in the back line to at the front of the pack, then did his signature flip-in throw.

She would catch the ball with both hands, take a few steps and turn forward, using the ball as a springboard against the ground. As soon as her feet touched the ground, she threw the ball in a high arc that invariably ended near the front of the other team’s goal, where her teammates had a chance to mount and head the ball for a score.

The move helped her lead the Knights with 23 assists this season. She was also the player coach Sean Fahey assigned to execute the corner kicks, and her strong, accurate leg also gave the Knights an excellent scoring chance.

“Grace has been rock solid for us all year,” Fahey said. “She is tough, physical, phenomenal in the air and reads the game very well. In addition to what she does defensively, she also led the team with 23 assists and scored six goals, including the first goal of our match for third place against Evanston.

“She took most of our dead balls with great deliveries and her throw-in has been incredibly huge for us all year as well. She leaves behind big shoes to fill.

The backhand throw is something Grundhofer has done seemingly his entire life.

“I’ve been throwing since I was about seven years old,” she said. “I used to do gymnastics when I was little and my older sister was a footballer. I went to one of her games and saw someone in that game doing a back throw and I was like, ‘ I can go.”

Grundhofer will take her talents to Fort Hays State University in Hays, Kansas in the fall, where she plans to study physical therapy.

“I’ve been involved in it since I was a junior,” she said. “Knowing that my college commitment was away from my senior was one less thing to worry about, so I could just focus on football.

“I didn’t really want to go that far from home. It’s a 10-1/2 hour drive. But, I wanted a school with a good physical therapy program and I wanted to play football, so Fort Hays was the best fit.

Many successful high school football programs have the majority of their players from the same traveling football club, so they know each other at the start of the high school season. This was not the case for Lincoln-Way Central.

“The girls in our team came from 14 different clubs,” Grundhofer said. “We didn’t know how everyone was going to fit together. At the start of the season, I had no idea that we would have such a good season as we did. Once we started training together, I thought we could be pretty good.

It was a victory over an old enemy that gave the Knights the idea that a state trophy was a possibility. Lincoln-Way Central defeated Sandburg, 5-0, on April 19.

“Sandburg had already beaten us a bit,” said Grundhofer. “We had lost in the PepsiCo tournament just before playing them, but we thought we had played well in that game (a 2-0 loss to Gurnee Warren). Once we beat Sandburg and beat them like we did, we thought we could do something special.

Lincoln-Way Central, with Grundhofer as the catalyst, recorded 21 shutouts during the season and ended the year with a win, beating Evanston, 2-1, in the Class 3A third-place game.

“Defense was definitely a priority,” Grundhofer said. “Coach Fahey preaches defense and we listened to him and did what he taught us. Defense is hard work, and you have to really communicate and be on the same page. We had a lot of talkers in the back row, and that really helped us.

Don’t expect the flip throw to leave Lincoln-Way Central, though. Although Grace Grundhofer will not be part of the team, her presence will be felt next year. She is currently helping her younger sister, Chloe, perfect the Grundhofer flip.

“I work with my younger sister,” she said. “She’s almost there.”