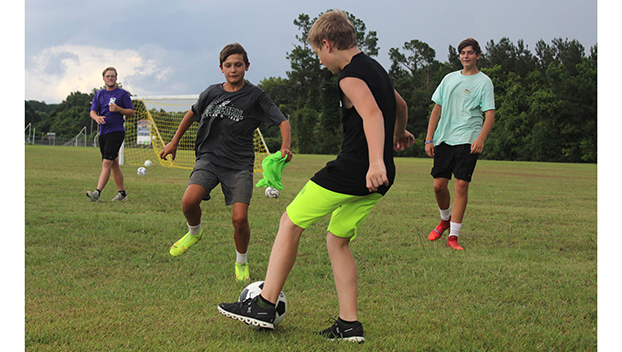 NATCHEZ – Cathedral Alumnus Nic Waycaster returned to Miss-Lou this summer to offer a soccer camp for players in grades 8 to 12.

Waycaster is working on his Class C coaching license and running Magnolia Soccer Academy camps for area schools. This week he was in Natchez working with the Cathedral football team. This is the fourth camp he has done this summer and he has four more camps to do.

While some schools have already set up a week to camp with Waycaster, they will have a camp open to any high school student in Vidalia from July 12-14 for girls and July 19-21 for boys. They will meet from 10 a.m. to 1 p.m. on those days and the cost of camp is $75.

“We focus on a closer touch and confidence with the ball,” Waycaster said. “We get the kids to become more confident with the ball because it shows in the way they play. It takes time on the ball and we put the kids in a position where they have the ball and a player to attack in a 1v1 situation, so the objective is clear. We give them lots of rehearsals.

He also works with children to develop bbetter autonomy on the ball. With Class C training, they focus on improving a player’s autonomy and empowering children with repetition.

Waycaster has split the camps into meeting times for girls and meeting times for boys each week because he wants to focus more on the players. The fewer children there are, the more precise he is able to be in his training.

He said he wanted to work with kids in Mississippi because he knows the athletic talent is there, but the kids just need more development. A player can be developed by having the will to do better and by keeping an open mind. That’s what they’ll need for camp.

“A player must be ready to make mistakes. If you get someone who’s good but isn’t persistent, it won’t help,” Waycaster said. “I prefer to have someone who is persistent. It’s all about mentality. »

To register for the Vidalia camp, visit https://forms.gle/P2tQJEaBEoVQcvz68.