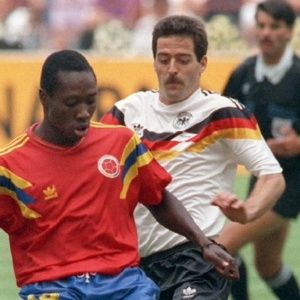 On Wednesday evening, Freddy Rincon, the “Colossus of Buenaventura”, died at the age of 55 after being the victim of a traffic accident in the city of Cali.

In the early hours of Monday, Rincon was traveling in a van that crashed into a bus. He was admitted to the Imbanaco clinic with a serious head injury, for which he underwent surgery that lasted nearly three hours. In the days that followed, his health deteriorated until his death.

Yesterday, social media went viral on video of the goal Rincon scored on June 19, 1990, when Colombia drew 1-1 with Germany at the World Cup in Italy.

“That day the sun shone on all of Colombia, who smiled thanks to Valderrama’s precise pass to Rincon, who pushed the ball between the legs of German goalkeeper Bodo Illgner,” the sports ministry said in a statement. a posthumous tribute.

“My soul hurts. I’m very sad at the passing of an admirable human being who has captured the hearts of the world. Freddy, my dear friend, I will miss you forever!” said former Colombia coach Jorge Pinto whom Rincon has always described as his “mentor” and one of his best friends.

“One day we became a family. We learned to love and respect each other. We became unforgettable. I love you,” Carlos ‘el Pibe’ Valderrama said on his Instagram account, where he also posted a photo in which they appear together laughing. .

Rincon was part of the Colombian teams that participated in the World Cups in Italy (1990), the United States (1994) and France (1998). He also played with clubs Real Madrid (Spain), Santa Fe and America (Colombia) and Corinthians, Santos and Cruzeiro (Brazil).