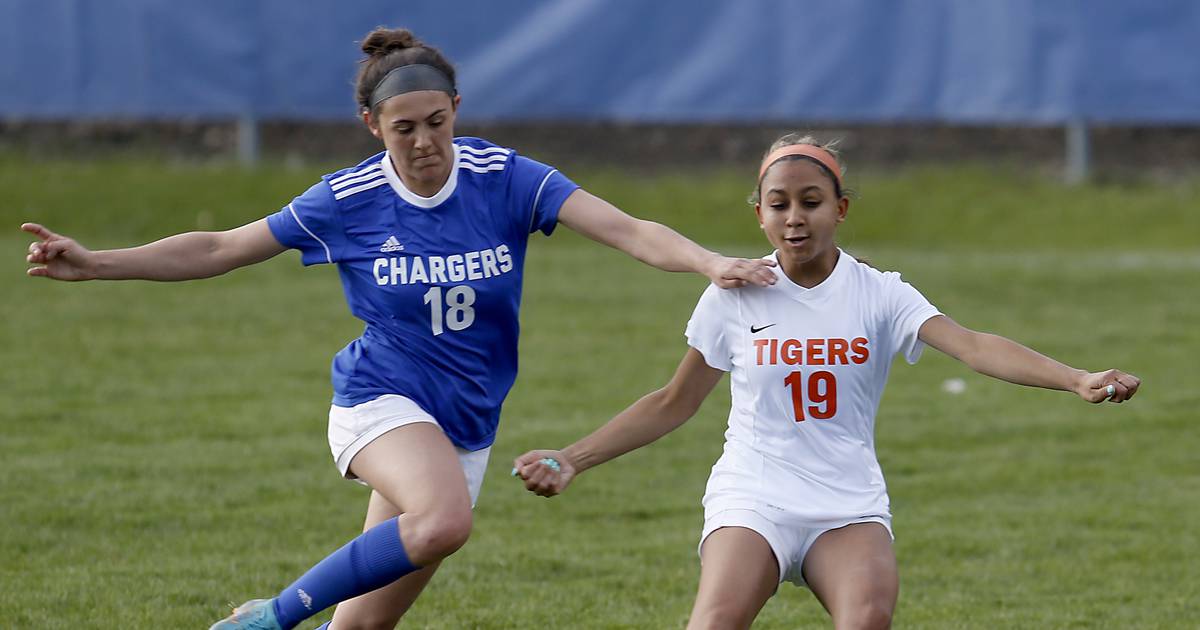 The Dundee-Crown senior returned to play football for the Chargers this season for the first time since tearing her left ACL in her freshman year in spring 2019. Mensik played for Eclipse Select Football Club over the past two years.

The Notre Dame signee caused a stir in her first two games scoring seven goals and never looked back, becoming one of the most talented players in the Fox Valley Conference. Mensik controlled every aspect of the match, whether she was scoring goals, catching the attention of the opposition’s top defenders or setting up plays to help her teammates score.

Mensik was a leader on and off the court and helped the Chargers win their first regional title in program history and advance to the Divisional Final Round.

For her efforts, Mensik was named the Northwest Herald Girls Football Player of the Year, selected by athletic staff with input from area coaches. Richmond-Burton’s Reese Frericks was also considered for the honor.

Sports journalist Michal Dwojak had a few questions for Mensik, including what it was like to return to high school football, his dream job and his hidden talent.

What will you remember the most from your senior season?

Mensik: I think the memory I’m going to remember the most is winning regionals. Dundee-Crown have never won a regional or made it as far as we have. I think the accomplishment of winning a regional for my team and my coaches, especially assistant coach Rey Vargas, who has been coaching football for 22 years and he has never won a regional. Just seeing Vargas’ face and the excitement of the players, parents are a memory I will remember forever.

What was it like coming back to play football in high school after only playing club football?

Mensik: It was definitely a different game, but for me, I enjoyed it so much because I got the opportunity to be a bit more selfish with the ball, which I can’t do at club level. I think it really benefited me as a player because I gained confidence with the ball. It was a great experience and I don’t regret it at all.

Are you excited to play football at Notre Dame?

What would be your dream job?

What musical number would you like to see in concert this year?

Mensik: The one I just read recently, “Sold”. It was a realistic book about sex trafficking in India and it really hit me and it was sad. I’m really into non-fiction novels. These books where you can see what’s really going on in this world really strike me.

Who is your favorite professional footballer?

Mensik: As cliché as it sounds, Lionel Messi is someone I always looked up to as a little girl. Because I look a lot like him and I’m very small and fast, so he’s always been a role model for me because I always wanted to be like him with the speed and the small body.

Who was your favorite Disney character when you were a kid?

Mensik: It was definitely Sven from “Frozen”, the reindeer.

Which celebrity would you most like to spend a day with?

Mensik: Michael Jordan is my biggest role model in my life. Just the chance to meet him would be absolutely amazing.

What would you change in football if you could change one thing?

What sport are you not really good at?

Mensik: I’m really bad at swimming, it’s not my strong point. I can’t swim lengths, as to this day I always paddle doggy style. I love to swim, I will always swim when my friends want me to; however, if we run, I lose.

Do you have any hidden talents?

Mensik: I’m really good at cooking. I really like to cook and few people know it because I don’t cook much, but when I have the opportunity or the urge to cook, I tell myself let’s cook, I cook the best dish. My go-to is this pasta salad.

If you celebrated a goal like NFL players celebrate touchdowns, what would you and your teammates do?

Mensik: I would ask our teammate Kate Raby to get in the middle and we could surround her and do like what Cristiano Ronaldo does where they all surround her. Raby is just the center of attention.