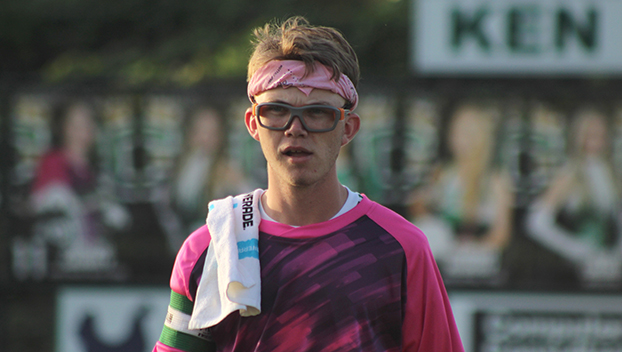 NATCHEZ — Cathedral senior Joseph Garrity said he knew this season was going to be tough before it started. The Green Wave lost six seniors and defender Paxton Junkin did not return for his senior season.

Using his experiences and his desire to help the team win no matter what, he stepped back to take on a leadership role. It was his ability to lead the team by example as a goalkeeper and midfielder that made him the Natchez Democrat All-Metro Boys Soccer Player of the Year.

Head coach Dennis Hogue said he always built the team and was a student of the game in an interview after Garrity’s last game. They needed his expertise with a young team to help build the future.

Cathedral didn’t have a JV team because junior college-age players had to play in college, and he was the only senior on the team.

He was asked by interim head coach Rick Simons to play as a midfielder to help the team after a loss to Oak Forest. He stepped up and it made a difference in their performance as they played well in the losses to Brookhaven Academy and Copiah Academy.

“I was taught to leave something better than what you found. I think I left it better than I found it,” Garrity said. “This team will be strong next season. The younger ones will have a year of growth and should be bigger next year.They are going to be pretty good.

It was the first time he had played an off-goal game since his freshman year. The first game was tough, he said. Typically, if he was out of goal, he had to be in midfield for 10 minutes trying to score. The short time frame forced him to give 110% in a sprint until the final whistle. It took him until the BA game to find the best way to play.

Instead of going too hard and going home bruised and battered, he stepped back and worked the ball better.

The team started clicking and he started helping the team close in to beat their opponents. There were a few games they could have won but lost, he said. They had a few chances against Brookhaven Academy if they had scored they might have changed their season.

Cathedral finished the district season 2-6 with its wins over Adams County Christian School. They missed the playoffs after doing so the previous year to break a 10-year drought.

Garrity’s proudest moments of his career came during his junior season. It was his season, he said. The 2-1 win over ACCS to reach the playoffs was special and a 1-0 loss to Hartfield Academy in the first round was the best he had ever played in goal.

“It was the most tiring game I’ve ever played in front of goal. It was my proudest moment,” Garrity said. see me after the game and told me and Paxton that we were good players. Their head coach told me that I was the best goalkeeper they had ever played. That made me made proud.

The game he should be most proud of was to be the last game against AC of the season. Garrity played in midfield for his last game and wanted to score so badly against the City rivals. He noted that he never scored against them.

The first half it was difficult to create chances as the rebels doubled and tripled with him. It worked because he couldn’t score and it kept the green wave off the board. Head coach Dennis Hogue asked him to pass the ball more and he did.

The opening goal was an assist for John Carter and he got the ball rolling as he finished the game with four assists. It was an emotional end to his career and Garritys 19 years playing football for Cathedral.

“I had been playing football since I was three and four years old. I grew up playing with my siblings and Cathedral. It hit me hard after the game,” Garrity said. was pretty weird the next two days. I knew I would never go to football practice again. It was tough for about a week there.

The senior gave his all to the program. Before the final whistle against Brookhaven Academy on January 13, he fell to the ground exhausted after covering every blade of grass. It was a fun but difficult season.

Garrity said he would miss football but knew his career would have to end somewhere. He will attend Ole Miss and go to law school. He said the Football Player of the Year honor was a pat on the back.

“Once in a while, a pat on the back feels good. It means someone saw your hard work and the hard work paid off,” Garrity said. “Football isn’t a one person sport. It’s a team sport. I wouldn’t be a person without the boys in the team and Dennis and Rick pushing us to be the best we can be. It all starts through practice.”