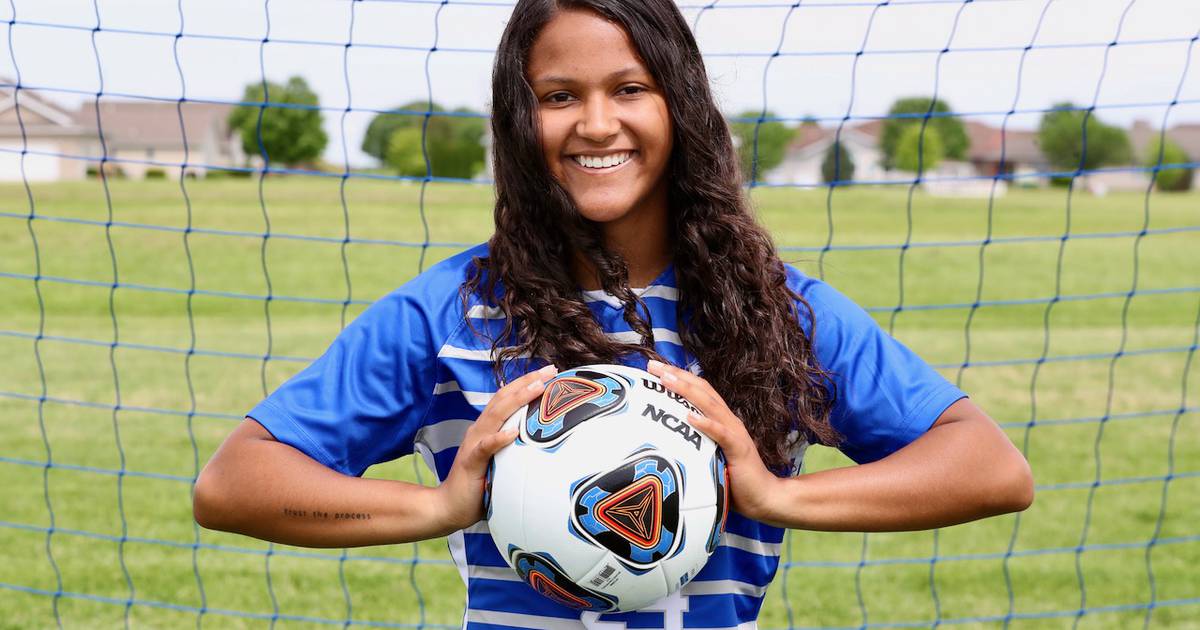 Mariah Hobson wears her emotions and her lifestyle on her sleeve.

A tattoo engraved on his right forearm – “Trust the Process” – shares his inner thoughts about life and the football pitch.

“No one goes where they go for free. I have to work for whatever you need in life,” she said. “Ever since I was little, I thought everything would be fine. The challenge got bigger as I got older, so I realized I had to work harder, and that obviously shows on the pitch.

“I’m just happy to be able to show other people and little kids who are pursuing the same goal as me to be able to keep going and going until they get what they want.”

The process worked out pretty well for the Princeton High School junior. She led the Tigresses to a regional championship this season after an Elite Eight run a year ago.

Along the way, she scored 63 goals to break the PHS single-season record of 56 by Jasmine Kunkel in 2012 and the area record of 60 by Mendota’s Lauren Kellen in 2011, a figure that ranks fourth in the state history.

For all her accomplishments, Hobson is the NewsTribune Women’s Soccer Player of the Year for the second consecutive season.

For Hobson, the “process” is about being mentally strong.

“I would say mentality is a big thing in football, especially figuring out where you need to be in order to score, [to] help your teammate score,” she said. “Mindset is the biggest thing I learned growing up, probably even more important than the actual skills you have. I just work on my shooting, my passing. Even the little things to help your team.

“If you think you’ve done enough, you’re clearly not close to what you need to do.”

She’s a shoo-in to break Kunkel’s PHS career record of 106, and if she duplicates or approaches this year’s totals next year, she’ll be aiming for the top 10 career goals in league history. State.

Seeing 63 footballs placed in the goal for her Player of the Year photo shoot helped her put Hobson’s achievement into perspective, calling it “crazy” to see it.

“She’s a great player and she scores a ton of goals. I can’t wait to see what she does next year. I think it will be difficult to match her 63 goals this season, but I know that she’ll be motivated to do it,” Gray said.

“A lot of her scoring ability will come from the team around her. It’s going to be difficult, if not impossible, to replace this year’s seniors, but we’ll see. I can’t wait to see Mariah play next season and beyond.

Of all the goals she has scored this year, Hobson said her favorite was the one she scored against Rockford Christian in their semi-final loss.

“It was the last game we lost, unfortunately,” she said. “We had been back and forth and there were five people on top of me at all times. I just threw that ball, and when I saw it go right over the goalkeeper’s fingers, it was unreal. Chills, honestly.

Hobson said she wasn’t too confident going into this season because Princeton lost a lot of good seniors last year.

“I was a bit worried about how our team would develop and all that. Once we got started together, we did really well,” she said. “Honestly, I just had to stay there until my team made a play and be there to clean up the mess. Almost every goal I scored was probably because of them, not because I was good or anything.

A notable absence this year was 2021 graduate Savannah Birkey, who now plays for St. Ambrose University.

“It was a bit difficult to deal with without her being there because she was always there to be my guide – ‘You have to do this, instead of that.’ I had to do it myself and grow a bit as a player and a person after he left,” Hobson said.

“I mean, I miss her a lot, but I’m glad I had this chance to grow on my own, and my teammates like Savannah and Viviana. [Robledo] this year, they really helped me this year.

The Tigresses were so close to returning to the section final that they lost on penalties to Rockford Christian. It was a disappointing loss, but that’s not what hurt Hobson the most.

“I was not sad that this season was over. It was just the fact that I couldn’t play with my girls anymore,” she said. “Me and Maggie Davis have been playing together since I was about 7 or 8, and now she’s moving on to bigger and better things, it’s going to be harder not to have those girls there to help out.

“I absolutely have to step things up because next year we won’t have Maggie or Maya. [Gartin] or Viviane. These girls have always been a big asset and a top dog. It’s going to be tough to fill their shoes, but I’m going to do my best and I’m going to hope for a good season next year as well.

Hobson already has colleges watching her and is keeping her options open. She would also like to become a soccer teacher and coach, maybe at PHS one day.

“I want to teach history, might as well be Coach Gray, cut and paste. … Kick the old man on the sidewalk someday,” she joked. “He’s done a lot of good things for this program, and I just want to be able to do that too.”

• Two-time NewsTribune Player of the Year

• 63 goals is the fourth most in state history